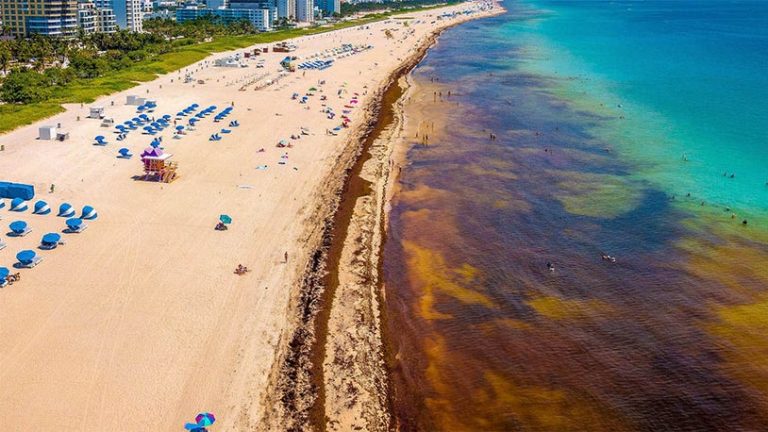 But what exactly is sargassum, and is it dangerous to travelers? What causes this natural phenomenon and how do we get rid of it?

Lets first start by answering the question – What is this sargassum? Sargassum is a seaweed that floats in large masses on the ocean floor. It naturally occurs and provides a very critical habitat for migratory organisms such as crabs, shrimp, sea turtles and fish species such as tuna and marlin. The best way to put it, this seaweed is part of our marine eco-system and is very important even though it may affect your beach vacations.

Why is it affecting my beaches, and will it stop?

Sargassum is not a new phenomenon; however, due to the perfect combination of increased nutrient runoff from the Amazon River off the coast of Africa and Global Warming’s changing water temperature, the sargassum has flourished in recent years. In recent years, the jet stream has moved upwards slightly which allows the winds and currents to push the seaweed ashore. The floating masses are now affecting tourism and beaches where visitors are now facing mounds of rotting seaweed causing a horrendous stench!

Is there a time or place I can go to avoid sargassum?

No one wants a ruined vacation; there are many places to go however because it is always changing we will never officially know where you can avoid sargassum. However, luckily because of seasons, we can predict when we will see the least amounts of sargassum. Sargassum generally floats from the West Coast of Africa when they die and are brought to the Atlantic through winds and currents.

As an avid traveler to the Caribbean and Mexico myself, I can say with certainty that the sargassum is now the new normal for beach destinations. But there is no need to worry, Sargassum is not toxic and has a horrendous smell. The resorts and local governments are all working on ways to prevent the sargassum from reaching the shorelines by adding sea walls and having cleaning crews constantly clean the seaweed.

There is also a lot of new innovations such as the Sargabot which allows governments to send out boats to catch the sargassum from the seawalls before it hits the shoreline. Because this is still a rather new phenomenon, the local governments are working on a more efficient solution and over time sargassum may become less noticeable. But for now, it’s best to avoid the months it is heavy by going in the months that sargassum is not floating over from West Africa.

So this leads to the question, when is the best time to go? To put it simply, during the summer months of Africa (southern hemisphere), you will see less sargassum in the Atlantic and Caribbean. This is in contrast to our seasons, where we have Winter in the Americas (North America). What this means is the months of November to April. We will see the least amount of Sargassum and it is the best time to go visit the beaches.

Summer Months in the Americas (Northern Hemisphere) would be the worst time to visit the Caribbean beaches because of the winter in Western Africa (Southern Hemisphere) which causes the sargassum to die off and begin their floating journey into the Caribbean, so the months of June to September would be the worst times to go to a Caribbean beach destination.

Feel free to contact me using the contact form here or on the navigation tab. I am always able to answer more questions as well as help you book a vacation that is more seaweed free. Of course, there is never a guarantee but because I send hundreds of people to the Caribbean on a monthly basis, I have a rather live update of the seaweed situation!

Biometrics Terminal and Boarding in the United States

Airport Lounges – Relax before your flight